Gennaro Contaldo
with his Mother and Sister
Minori, Italy

Gennaro and his Pumpkin
“Zucca” !!!

Pasta Pomodoro
Pasta with Tomato Sauce
SPAGHETTI with TOMATO SAUCE
Recipe :
12 ounce imported Italian Spaghettini
1 pound fresh Cherry Tomatoes, washed and cut in half
10 tablespoons Italian Olive Oil
2 cloves Garlic, peeled , crushed and cut in 4 pieces each
1/2 teaspoon Red Pepper Flakes
12 Basil Leaves, washed and torn into pieces
Grated Parmigiano or Pecorino Cheese
Put on a large pot of water with 2 tablespoons of salt and bring to the boil.
Add olive oil to a large frying pan. Add the garlic and let cook on low heat for 2 minutes. Add the red pepper and cook on low heat for 30 seconds.
Turn heat to high and add the tomatoes. Cook on high heat for 1 minute. Lower heat to medium and cook for 4 minutes on medium heat.
Add half the basil and 1/2 teaspoon of Sea Salt to the  the pan and let cook on medium heat for 4 minutes.
Add the spaghettini to the boiling water and cook until al dente (about 8 minutes).
Take 1/4 cup of pasta water out of the pot and put in the pan with the tomatoes, and let cook for 3-4 minutes on medium heat.
Drain the spaghettini in a colander.
Add the cooked pasta and remaining Basil to the pan with the tomatoes and mix. Sprinkle on a little olive mix and serve.
Serve with grated cheese on the side. Basta ! 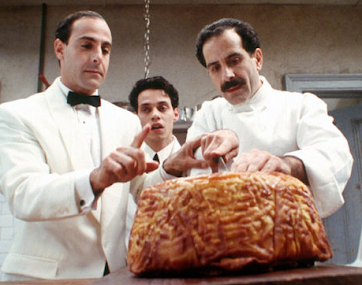 # 3 Rigatoni Amatriciana
PASTA AMATRICIANA
1¼ pounds rigatoni pasta (or bucatini)
120g / 4½ oz guanciale (cured pork jowl)
6-7 San Marzano tomatoes
100g / 3½ oz grated pecorino romano cheese
½ glass dry white wine
1 tablespoon extra virgin olive oil
Salt
Black pepper
PREPARATION :
Fill a large pot with water, add salt and bring it to the boil.
In the meantime, heat the extra virgin olive oil in a frying pan. Chop the guanciale into thick strips, add it to the an and cook until crispy. Add the white wine, cook for a minute to reduce, then remove the guanciale from the pan with a slotted spoon and set aside.
Add six or seven San Marzano tomatoes to the pan with the remaining oil and fat from the guanciale. Use a wooden spoon to flatten the tomatoes and simmer for a few minutes.
Cook the rigatoni in the pot of boiling water until al dente, add the crispy guanciale back into the pan of tomatoes then drain the pasta and add it to the sauce.
Toss everything together well then divide into portions and serve with a sprinkle of grated pecorino and a crack of freshly ground black pepper.
The WORLD’S TASTIEST RECIPE ?
RAGU BOLOGNESE
RECIPE

Spaghetti is one of the most famous dishes of the Amalfi Coast. The dish comes from the town of Nerano on the coast of the Sorrento Peninsula just across from Capri. The dish was created by Maria Grazia at her trattoria in Nerano. The primary ingredient of the dish is Zucchini with Povola or Caciocavallo Cheese grated into the pasta. Many restaurants on the Amalfi Coast and Capri serve this dish, and most locals know how to make it, and cook it at home, especially if they happen to have a little garden growing Zucchini, Tomatoes, and other vegetables. It’s easy to make and soul satisfying. If you’ve been to the area you may have already eaten it, and so know you can make it back home. Enjoy.

3 cloves Garlic, peeled and cut in half

¼ cup fresh Basil, washed and leaves torn in half

Slice the Zucchini into ⅛” rounds.

Fill a large pot ¾ full of water, with 2 tablespoons salt and bring to the boil.

Place the Olive Oil  in  a large frying pan, and turn heat to a medium flame. Add the Zucchini and start to cool. Sprinkle the zucchini with about ½ teaspoon each of salt and Black Pepper. Add the butter and garlic and cook the zucchini for 4-5 minutes on medium heat.

Add about a ¼ of the pasta cooking water to the pan with the zucchini, turn the heat to low and cook for about 6 minutes on low heat. Stir the zucchini with a wooden spoon as it is cooking.

Put the spaghetti into the rapidly boiling water and cook according to the directions on the package and the spaghetti is al dente (slightly firm to the bite) usually about 10-11 minutes.

After the zucchini has cooked for a total of about 11 minutes. Turn the heat off. add the Basil and stir. Taste 1 piece of zucchini for seasoning to see if you want to add any more salt or pepper.

When the spaghetti is cooked, turn the heat off and drain the spaghetti into a colander, reserving ¼ cup of the pasta cooking water in case you need to add to the sauce.

Return the spaghetti to the put that it cooked in. Add all zucchini and all the juices from the pan in the pot with the spaghetti and stir.

Add half of the grated Caciocavallo cheese and stir. The consistency should be just slightly loose. If it is too tight, add a little pasta cooking water and stir.

Plate the spaghetti on 4 plates, giving each person an even amount of zucchini. Drizzle a little olive oil over each plate and serve.

Note :  It’s best to make the dish with Caciocavallo Cheese, but if you can’t find, a combination of half grated Pecorino and half of Parmigiano Reggiano is a good substitute, or just Parmigano or Pecorino on their own.

Note II : Once you know how to make Spaghetti Nerano, you can make little variations, simply by adding one other ingredient that marries well with the dish. A great addition to this dish is to make Spaghetti Nerano just as above, and to add 4 or 5 pieces of sauteed shrimp on to each plate. Just have the shrimp ready and cook them in a little olive oil, seasoned with salt & pepper, and cooked for about 2 minutes on each side. Turn the heat off and add 4 or 5 pieces of shrimp to the plate with the Spaghetti Nerano and enjoy.

Spaghetti Vongole at Da MARINO
NAPLES, ITALY
Cookbook Author Daniel Bellino Zwicke says that this is the single best plate of
Spaghetti Vongole he has ever had in his life, and he has had many. He took this picture of
his plate of Spaghetti Vongole at Ristorante / Pizzeria Da Marino in Naples one day. Daniel says that it was one of the most memorable meals of his life, “I Loved it,” he said. He had a Insalata Frutta di Mare ( recipe ) for antipasto, which he said was as good as can be.
Daniel says that he was just planning on a plate of Spaghetti Vongole and a stater, but when he saw the pizzas coming from the oven and how good they looking, he couldn’t resist. He ordered a
Pizza con Salame thinking he would eat just half. “It was so good, I ate the whole thing. One of the best pizzas I’ve ever had in my entire life, and much better than ones I’ve had at Da Mateo and other much more famous Pizzerias of Napoli,” stated Daniel.

12 Cherry Tomatoes, cut in half

Place Littleneck clams in a medium size pot with a lid. Add Water and clams with 1 whole garlic clove, cover pot. Turn heat up to high and cook clams until they just open. Turn flame off. Remove clams from pot and reserve the cooking liquid.

Put a large pot of water on stove and bring to boil for cooking the pasta. Add Spaghetti or Linguine to pot of rapidly boiling water with salt and cook according to directions on package.

Add Cherry Tomatoes and cook over medium heat for 2 minutes.

Add Cockles (or Manila Clams) to pan with garlic and olive oil. Add cooking liquid from larger Cherry Stone Clams to pan. Put cover on pan and turn heat to high, and cook until the Cockles (clams) just open.

Remove cooked Cherrystones from shells and chop each clam into about 6 pieces or so. Add the Chopped Cherrystone Clams and Parsley to pan with Cockles. When pasta is done cooking, drain it and add to pan with clams. Using a pair of tongs, mix pasta with clams, and cooking liquid.

Divide Pasta into 4 to 6 equal portions on plates or pasta bowls. Divide all cooking liquid and Clams over each portion of pasta on the plates. Sprinkle on some more Olive Oil once Pasta is plated. Enjoy.

“USE The BEST TOMATOES”
.