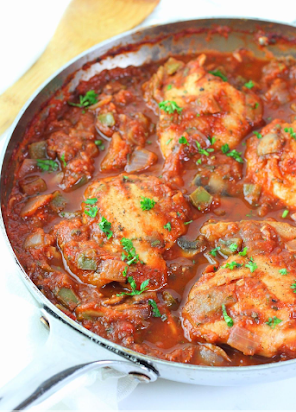 Pollo alla Cacciatore is quite popular all over Italy, from Piedmonte in the North West of Italy, down to Campania and Naples, and even into Sicily. The dish is especially popular in Tuscan and the Umbria region of Central Italy. Chicken Cacciatore is hugely popular with the Italian-American Enclave, as it is tasty, easy to prpepare, and has inexpensive ingredients, and the dish holds well when left in the refrigerator and is reheated for multiple meals. This being said, you can make larger batches by doubling and even tripling the following recipe.

There is no one sigle recipe for Pollo Cacciatore which means hunters chicken. The dish was originally made by hunters, using rabbits, which you can subsitute one or two rabbits for the chicken in the recipe that follows.

As the original dish was made by hunter, who besided shooting rabbits and other wild game, and also coming across wild mushrooms in the woods, the hunters made their Cacciatore with Muschrroms. If you don’t like msuhrooms, as many people do not, they may be omitted from the recipe. If you don’t like Peppers, you can omit them as well, as long as you have the base sauce recipe, of the tomatoes and wine, and the aromatic vegetables, especially the garlic, and onoins. You can also add Olives to the dish, if you so choose. Experiment, and make the recipe you own., just Enjoy.

Wash the carrot and celery under running water and chop them coarsely.
Pat dry the Chicken with paper towels. Season both sides of the chicken with Salt & Black Ground Pepper.
Take a frying pan and put the olive oil in it and heat it well.
Add the Chicken to pan with the olive oil and cook on medium heat, until the chicken is nicely browned on all sides, cooking over medium heat for 4-5 minutes on each side.
Remove the Chciken from the pan, and set aside on a plate to rest.
Add the Red Bell Peppers and cook on low heat for 6 minutes.
Add the Mushrooms to pan, and add the Salt & Black Pepper to the peppers and mushrooms. Cook on medium heat for 5 minutes.
Add th onion and cook on low heat for 3 minutes.
Then add the chopped garlic and the bay leaves. Cook on low heat for 3 minutes.

Add the chicken back to the pan. Turn heat on high.
Add the Red Wine to pan and cook on jigh heat until the wine is reduced by half its original volume. About 4-5 minutes.
Add the Tomatoes, Carrots, and Celery to the pan.
Turn heat to high and cook until the contents strarts to bubble and boil.
Turn the heat to a low simmer, and let everything cook until the chicken is tender.
About 25 minutes.
Turn the jheat off and let the Chicken rest.
Serve 3 pieces of Chicken with the vegetables and sauce to each person.
You can serve this with boiled or raost potatoes, or over any pasta or egg noodles that you choose.
Enjoy !!! 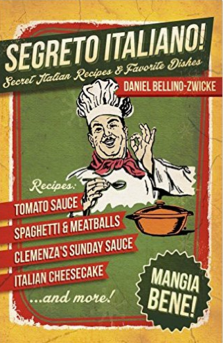